What a Peeling Sunburn Really Means

Maybe you skimped on the sunscreen. Then you forgot to reapply because it was cloudy. Now you have a sunburn that feels very much like your shoulders have been set on fire.

In a couple of days, the burning sensation will subside. It’ll be replaced by a persistent itchiness as your sunburned skin begins to peel. While a sunburn is never a good thing – a single sunburn increases your risk of developing skin cancer later in life, and the risk doubles with a blistering burn – peeling is a step in the right direction.

Peeling skin is your body’s way of ridding itself of damaged and dead skin cells. It’s a form of protection.

Where you see red, peeling skin, what’s going on at a microscopic level is something called programmed cell death. It’s a process caused by significant inflammation. Skin cells become too damaged to function as they should, so they begin shutting down.

Should you help the process along?

Tempting as it might be to try to remove some of your peeling skin yourself, doing so could hinder and prolong your healing. It could also increase inflammation and lead to infection.

Try to keep the affected skin moisturized as best you can. Should some of your skin slough off in the process, so be it. But don’t actively tug at it. Aside from the aforementioned reasons, you could also remove healthy skin along with the damaged skin.

Most sunburns will heal on their own after several uncomfortable days, but that doesn’t mean there’s no longer any cause for concern. In some cases, despite significant damage to their DNA, skin cells will continue living, and they can become cancerous. The chance of developing one of the three most common skin cancers – basal cell carcinoma, squamous cell carcinoma, and melanoma – is proportional to the amount of sun you expose yourself to unprotected.

What you can do to prevent a peeling sunburn

That’s why it’s so important to slather on a broad-spectrum sunscreen with an SPF of at least 30 every day before you head out, even if you’re just running errands. If you’re planning on staying outside for longer than a couple of hours, make sure you reapply.

It’s also a good idea to wear a hat that shields your face and neck from the sun and to seek out the shade as much as possible. You might think sunburns occur only after a long afternoon at the beach or by the pool. But this time of year, ultraviolet rays can scorch unprotected skin in a matter of just a few minutes.

So be smart and be safe.

Yes, Your Lips Can Absolutely Get Sunburned
Next Post: The Dos and Don’ts of Treating a Sunburn 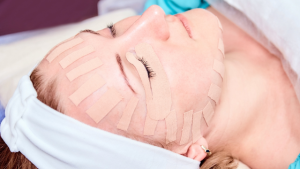