Is Dairy Destroying My Skin?

“Will cutting out dairy help control my acne?“

It’s a question I’m asked a lot. The truth is, there is some evidence that suggests cutting back on certain dairy products may help clear up your acne, but it may not be for the reasons you’re thinking.

What the research says

Few studies have examined the relationship between dairy and acne, which has left researchers to hypothesize what the underlying connections may be. So far, the results of those studies have been mixed.

Where cheese and yogurt are concerned, there’s no evidence they can lead to more breakouts, according to the American Academy of Dermatology Association.

Some researchers believe the amount of milk, rather than the type of milk, you consume may be the more important factor with regard to acne flare-ups. Others have speculated that the artificial and natural hormones present in milk could influence breakouts. There’s also limited research that suggests the whey protein found in milk could be linked to pimples in some people.

That said, the most popular theory when it comes to the relationship between food and acne revolves around a food’s glycemic index. Food that is loaded with sugars and simple carbohydrates usually ranks higher on the glycemic index and is quickly digested, which causes your blood glucose levels to spike. Think pizza, cookies, sweetened yogurts. Regularly eating these foods can force your body to increase its production of insulin and, over time, lead to a host of issues, including inflammation and, potentially, acne.

Many dairy products rank low on the glycemic index. However, some researchers believe that consuming too much of them can have the same effect. Some studies have explored the possibility that eating low glycemic foods, like many veggies and fruits, beans, and whole grains, could not only stabilize insulin levels but also lead to a reduction in acne.

More research is needed. But what this really tells us is that it’s hard to say that a single factor would make a big difference when it comes to acne.

So, what is proven to improve acne?

This much we know: There’s no harm in taking a closer look at the impact your diet may be having on your skin. The American Academy of Dermatology recommends keeping a food diary and noting when certain foods or drinks appear to trigger a breakout or worsen existing acne. Then, it recommends experimenting with cutting out those foods or drinks.

If you think dairy products, specifically, are making your skin worse, start by eliminating those that have a high glycemic index (ice cream, milkshakes, sugary yogurts). You’re going to need to be patient. To see any skin changes as a result of cutting out certain foods, it could take as many as six months.

In the meantime, remember that your diet is just one of the many factors that may play a role in your acne. Your environment, sleep quality, hormones, and genetics all have a hand in it, too.

Do you have questions or would you like to speak with New Jersey dermatologist, Dr. Robert M. Paull? Click here to contact the Center for Dermatology & Laser Skin Surgery today!

What, Exactly, You Should Be Looking for During a Self-Skin Check
Next Post: Will Getting Botox in Your 20s or 30s Mean Fewer Wrinkles Down the Line? 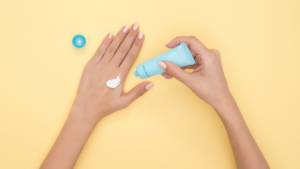 With it finally starting to feel like spring, you reach into your cabinet for last summer’s bottle of sunscreen. Suddenly, it occurs to you: Is this still good? For the moment, let’s ignore the …